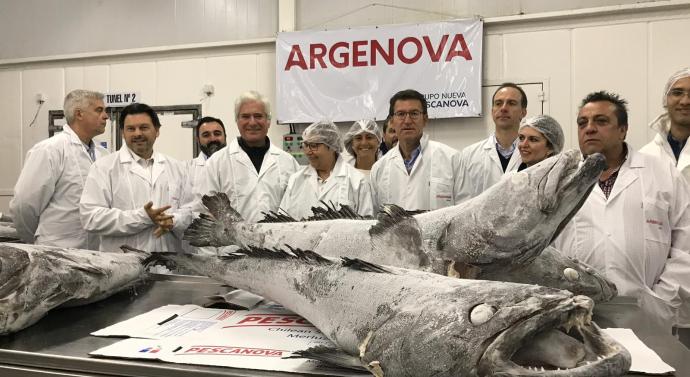 The president of the Regional Government of Galacia visits the facilities of Argenova, a subsidiary of Nueva Pescanova in Argentina

The president of the Regional Government of Galicia , Alberto Núñez Feijóo, has been in Argentina to visit Galician fishing companies with a presence in the country. Taking advantage of this trip, the president visited yesterday Argenova’s toothfish processing plant.  Argenova is the Argentinian subsidiary of the New Pescanova Group, who are COLTO Members.

The conselleira de Mar, Rosa Quintana, and the Undersecretary of Fisheries Coordination of the province of Santa Cruz, Mayra Totaro, were also present for the facilities tour. They had the opportunity to meet the team and visit the Argenova XXI , one of the company’s vessels that fish in Argentine waters for toothfish.

According to his own statement, it is “a special ship, with a highly accredited crew and dedicated to a highly valued species. Argenova is one of the few companies that fish for toothfish in Argentina.” He added that: “The visit to the processing plants demonstrates the great product we have and the fulfillment of the maximum sanitary and hygiene conditions”. In the framework of the visit, he thanked Galician companies for the 5,000 jobs generated in the country and the work and professionalism of captains and crews of the more than 80 vessels that operate in Argentina.

With a team of 800 professionals and 16 boats dedicated to the fishing of black hake, shrimp and pota, Argenova has a processing plant and a refrigerator in Puerto Deseado (Santa Cruz), where it began operations 31 years ago. There, Núñez Feijóo highlighted his “interest in sustainable fishing, the improvement of the living conditions of the crews on the boats and a renewal of fleets like the one Pescanova is doing now through Galician shipyards”.

During his trip to the country, the president also met with administrations, businessmen and fisheries managers to discuss the situation of Galician fisheries with a presence in Argentina. In this regard, he stressed the interest of the region for Galician companies abroad and said: “Galicia is one of the main investors in this area in Argentina and that is why we are here: to support our companies and our sailors.”

About Nueva Pescanova
The Nueva Pescanova Group is a leading Spanish multinational in the sector, specializing in the capture, cultivation, processing and marketing of seafood, both fresh, chilled and frozen.

Founded in 1960, it employs more than 10,000 people and has a presence in more than 20 countries on five continents. The Nueva Pescanova Group sells its products in more than 80 countries around the world.