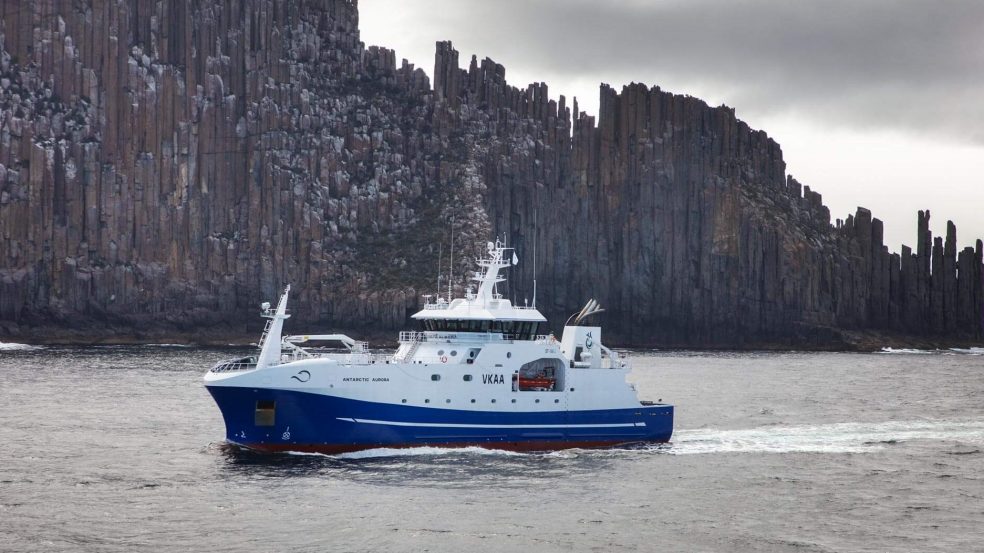 COLTO Member, Australian Longline, is excited to introduce the 62 metre Antarctic Aurora to its fleet to operate within the toothfish fisheries that are managed by CCAMLR and AFMA under the strictest environmental conditions found in any fishery in the world. This deepwater longline vessel has been purposefully designed and built to catch fish from depths down to 2000 metres within the Southern Ocean where strong winds, huge seas and freezing conditions are relentless.

The vessel had its naming ceremony in Hobart in late November 2020, attended by Senator Jonathon Duniam, Senator Eric Abetz, representatives from CCAMLR, AAD, CSIRO and other invited guests.

With a focus on the environment this vessel has some state of the art design features on board including; a moon pool hauling system and underwater setting chute that between them almost completely negate the risk of seabirds incidentally being caught, diesel electric propulsion system that significantly reduces the amount of fuel burned, inbuilt micro fibre filtration systems and large rubbish holding bins and fish offal tanks that ensures all waste is held on board.

Just as important, however, are the numerous features that maximise the safety, well being and comfort of crew and observers including a gymnasium and sauna, hospital, every cabin with its own ensuite and wifi throughout the vessel. Additionally fish handling systems have been developed as a first for toothfish vessels that enhance fish quality and vessel unloading systems made more efficient by enabling product to come off already palletized and labelled for direct access to the markets.