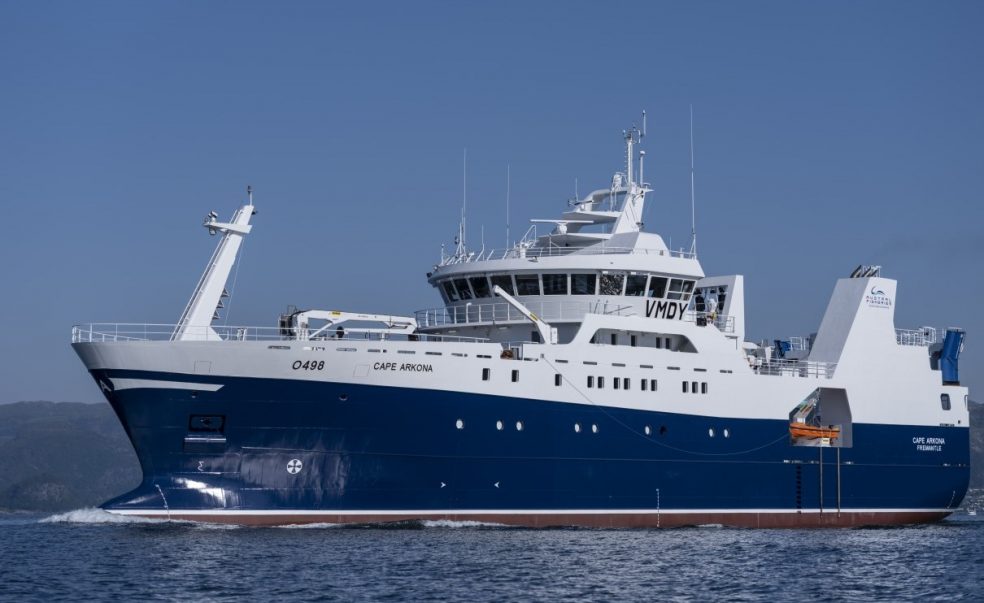 There could hardly be a longer delivery trip. Cape Arkona set off from Måløy in Norway to steam for 44 days to reach Fremantle in Western Australia, due to arrive in late August.

There’s a startling amount of both technology and clear thinking packed into Cape Arkona’s 68 metres, and this new vessel built for Austral Fisheries is a unique combination, able to carry out its primary role of longlining for toothfish down to 1600-2000 metres, as well as trawling for pelagic species and having the option of fishing with traps.

Cape Arkona will replace one of the older longliners in the Austral Fisheries fleet – but it’s not a like-for-like replacement, as the newbuild brings with it new capabilities, plus a sophisticated set of propulsion options for efficient operation.

‘We have a unique response to the way Austral Fisheries operates,’ said the company’s CEO David Carter, adding that the build process was also out of the ordinary, by-passing much of the usual formalities.

‘We’ve done three projects at Båtbygg in the past. So this time we went for an open book process, working as collaborators in a collective effort, each bringing their own skills and networks to the collaboration.’

The 66.90 metre LOA, 15 metre beam Cape Arkona is built to a Skipskompetanse design, with the hull constructed by Marine Projects in Gdansk and brought to Båtbygg in Måløy to be fitted out.

Austral Fisheries decided against going for the moonpool option, seeing this as requiring too much compromise in layout and hold space, instead going for a conventional setup with the line hauled over the starboard side. The complete 70,000 hook longline system is from Fiskevegn, with a Captain Hook control system.

The transom has a cutaway aperture on the starboard side – which has been given its own colourful name by the crew – allowing the line to be shot below sea level to eliminate bird strikes, although Cape Arkona is still required to deploy Torry lines while shooting the line away.

The trawl ramp is offset to port, and trawl capacity is primarily intended for icefish, which has a wide distribution around the Southern Ocean, with fisheries also in South Georgia and French territories, as well as the Australian Antarctic regions – but this is an erratic fishery.

‘It’s unpredictable, and we’re the only ones who have been able to commercialise icefish,’ David Carter said.

‘Icefish congregate around Easter-ish, and it’s a fishery you can miss by a day. So fitting out a trawler to fish for icefish, steaming eight days there and eight days back, is an expensive roll of the dice. But we can be fishing steadily on toothfish, steam off that and see what’s on the sounder – and if they’re there, go for it.’

He added that the toothfish fishery has also seen is share of changes. Austral Fisheries was a pioneer of the toothfish fishery, initially as a trawler operator, before adapting to work exclusively with longline gear, and the company was also central to the long battle of stamping out what had been a huge IUU fishery in the Southern Ocean as illegal operators competed with the small number of licensed fishing companies on a very unequal basis.

Austral and the other legal companies partnered with CCAMLR and the Marine Stewardship Council in a long and ultimately successful campaign that established a market for certified catches, undermining much of the market for illegal catches as toothfish became one of the fishing industry’s good news stories. But it can still be a fishery with serious variations.

‘In 2015-16 there was a marine heatwave in the Indian Ocean and fishing was terrible that year. CPUE dropped dramatically and quotas were under pressure,’ he said.

‘This year we’ve been blown way and fishing has been amazing. Plus there are very promising signs of strong recruitment that gives us confidence in the future. That’s encouraging for a company that has more than a passing interest in getting this right.’

Alongside its longline and trawling capacity, Cape Arkona is also rigged for deploying traps, and this is about future-proofing.

‘Longline fishing is efficient, it’s selective and it takes good care of the fish. But we’re between the birds and the whales. We can longline in the winter when the birds are further north and not breeding. We’re also aware of interactions between longliners and sperm and killer whales, and some depredation rates are as high as 60%,’ David Carter said.

‘We’ve toyed with pots and spent a few dollars on trying them out. The advantages are that it tends to select for bigger fish, and also that once a fish is in a trap, a whale’s not going to get it.’

A further positive point is that unlike the longline fishery, there’s nothing to stop trap fishing year-round.

‘The potting setup is an insurance. It’s not something we expect right now to be using a lot, but it’s there if we need it, and we had this built into the boat as this is a setup that’s very tough to retrofit later on.’

Down below Cape Arkona has an innovative propulsion package with an imaginative set of options to meet some diverse operational requirements – a key factor for a company that makes no bones about its environmental standards and has made a habit of putting its money were its mouth is.

‘We’ve spent a premium on living up to our values on carbon emissions and fossil fuels. This reinforces our standpoint on doing what’s right,’ David Carter said.

A father-and-son configuration of an 1825kW Caterpillar 3516C and 1250kW 3512C deliver power to a custom-built Brunvoll gearbox, driving a variable speed, controllable pitch CP95/4 P propeller, with a pair of shaft generators able to provide power to the ship’s systems, frequency-modulated to provide a steady 60hZ supply at any speed.

The combination provides the power needed to tow trawl gear when required, as well as economic running when working lines at slow speeds, and for much of the time there’s a modest power requirement.

‘At the moment they’re off Western Africa. They could go quicker by running the father as well, but they’re steaming at a steady ten knots on the son and burning 6000 litres a day, which is supplying all the power needed for propulsion and the systems on board,’ David Carter said.

In addition, there’s a 1000kW auxiliary engine, and with the father and son Caterpillars shut down, this can also route power to one of the shaft generators, which then becomes a motor to provide propulsion, plus there’s a battery system.

‘We also have a 350kW/hour Elmarin/Corvus battery pack that’s equivalent to three and a half Model S Teslas,’ he added.

Initially, the battery wasn’t part of the build, although the plan was to be prepared for a battery pack to be fitted later. But as the first steel was being cut, the decision was to go for the battery investment from the outset. This provides peak-shaving capacity and acts as a blackout prevention security system.

‘I went to the board, said that there was a case for installing battery capacity, and they agreed. As we’re using regenerative winches, as the warps are shot away we’re generating electricity instead of heat and brake dust, and it’s a major advantage that the battery provides instant dispatchable power,’ he said, explaining that usually when a large piece of equipment starts up, there’s a momentary power shortfall and a surge in demand, and this doesn’t happen.

‘The battery delivers the juice needed and the genset runs as usual,’ he said, adding that in harbour mode, the crew have seen that the battery easily runs all of the systems on board for three to five hours.

‘Then it registers power getting low, and kicks the generator into life. That runs for fifteen minutes or so and then shuts down. So there are fewer engine hours and there’s a saving in fuel and maintenance.’

David Carter said that the development of the innovative propulsion is partly down to having asked the right questions – and Brunvoll played a big part in this with ‘the handbuilt Norwegian gearbox’ and the positive experience with Atlas Cove a few years ago meant that it wasn’t a problem to place trust in the Brunvoll team.

‘Our experience is that they are super-conservative in their engineering estimates. With the system on Atlas Cove they predicted a saving of 12-15%, but that turned out to be close to 30% and saves us around a million litres of fuel a year,’ he said.

‘Critics have pointed out that we’re running a super complex vessel in a remote part of the world. But we’ve seen on the sea trials that you can switch off all the fancy stuff, and Cape Arkona runs perfectly in raw mechanical mode.’

Built with accommodation for up to 40, Cape Arkona is expected to work most of the year with a crew of 30 when longlining for toothfish, but the option is there for a larger crew if the on-board processing were to go in new directions.

‘They’re busy,’ David Carter said, commenting that with the company’s long experience of fishing for toothfish, starting with trawlers, there’s a wealth of knowledge among the crews.

Cape Arkona’s crew is drawn from the company’s fleet and crews also come from a variety of backgrounds, with Spanish, Chilean, Indonesian and South African crew members – and skipper Bruce Miller who is bringing Cape Arkona back from Norway comes from New Zealand.

‘We have a lot of skills and backgrounds, and we’ve trained up multi-disciplined crews, mixing up crew with experience of active gears and passive gear technology – very different styles of fishing.’