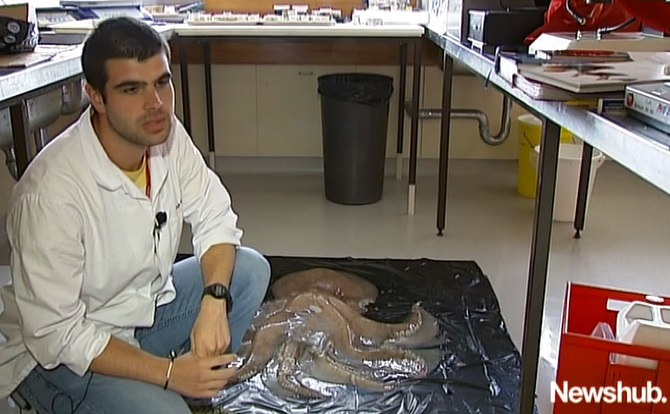 An enormous octopus has been brought to New Zealand for study and exhibition, and scientists think it’s the biggest one they’ve ever seen.

The research team of Darren Stevens, Dr José Xavier, and José Queirós have been studying the 1.2m long Great Antarctic Octopus at NIWA in Wellington, after it was fished up in the Ross Sea in Antarctica last month.

Mr Queirós was onboard the COLTO Member fishing vessel Antarctic Discovery to study the Antarctic toothfish, a major predator of the Great Antarctic Octopus, and brought the monster back to New Zealand.

“It just came on the hook, and the guys called me and said ‘we have a big surprise'”

Mr Queirós says the discovery helps scientists learn more about cephalopods in the Antarctic. Up until now, most of the focus has been on the more famous (and Te Papa icon) colossal squid.

Keeping it alive for study wasn’t an option – “it needs to be frozen to be imported here”.

The NIWA scientist’s study is mostly on octopuses’ beaks, so NIWA no longer need the octopus itself. So, they’re giving it away.

“A beautiful octopus like this needs to be conserved,” says Mr Queirós.

The octopus, which weighs 19kg, is to be re-frozen, before being moved to Te Papa where it can be preserved and set up for exhibition.

The freezing process is quite unceremonious: “I just put him in a bag,” admits Mr Queirós.