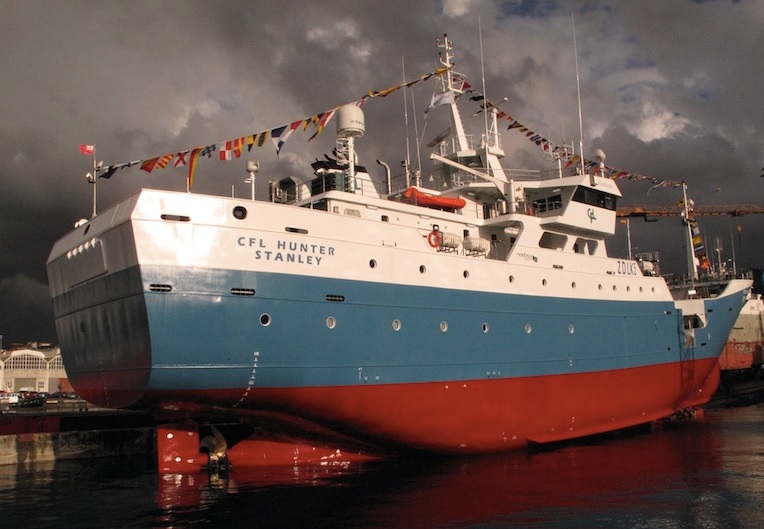 A modern longliner that will fish for toothfish in the Falklands’ waters, designed and built by shipyard Nodosa of Marin, has just been baptized and launched in Pontevedra, Galicia.

The commercial director of Nodosa, Jose Ramon Regueira, stressed at the launching ceremony that a vessel of these characteristics “is not easy to find”, because it features “novelties that make it unique”. Among them, he highlighted that this 60-meter long vessel is “the first in Spain with electric diesel propulsion.”

The event was attended by representatives of the shipbuilding company Consolidated Fisheries LTD (CFL), the Legislative Assembly of the Falkland Islands, the Xunta, the Port Authority and the municipality of Marin, as well as the shipyard itself.

The Minister of Economy, Employment and Industry, Francisco Conde, emphasized that Galicia accounts for 40 per cent of all contracts in the naval sector that are being developed in Spain, and said that a third of these vessels are fishing ones.

For his part, CFL’s president, Tom Blake, referred to the construction of the CFL Hunter as a landmark in the history of the company, being the first ship they build, and which is “the largest investment” of a Falklands’ company for this purpose.

Blake said that the managers of Nodosa and the company worked “very closely” to achieve a “very particular” boat. In this regard, he said that the CFL Hunter is “customized” based on the requirements indicated by its owner. The longliner has carbon dioxide refrigeration for fast and low temperature freezing, and electric diesel technology, which allows it to consume less fuel, and is also clean and quiet.

Regueira said that the CFL Hunter project dates back to 2013 and “came at the best time” for Nodosa, when it had just enlarged its facilities with the purchase of the neighbouring shipyard Factoria Naval.

“We were leaders in the design and construction of ships for the Falklands and other latitudes when fishing began to dawn,” he said. He added that the CFL Hunter has been a “precursor” to subsequent projects that place this shipyard “at the top of the sector in terms of innovative solutions for these ships that are very traditional.”

Nodosa is currently building a trawler for another Falkland carrier company represented by Tom Blake. Adding to this, there is another one, both for “the most important companies” in that archipelago, Europa Press reported.