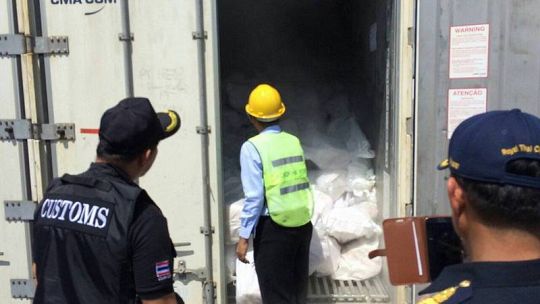 Police have finally confirmed that an investigation is underway into the disappearance of the illegal Antarctic trawler Kunlun, also known as the Taishan, which vanished from Phuket waters last week.

Details of the missing vessel, its crew and the whereabouts of its multi-million-baht prized cargo of illegal toothfish might be revealed as soon as Monday, The Phuket News has been told.

Up until today, all agencies involved in the case, including the Phuket Marine Office, the Marine Police, the Royal Thai Navy and Phuket Cutoms, have remained silent on the disappearance of the ship. (See story here.)

The Kunlun was seized when it arrived in Phuket on March 6 after outrunning the Australian and the New Zealand Navies (see story here).

“They (the Kunlun crew) by law were required to inform Phuket Immigration before leaving the country, but they didn’t,” he said.

“And we have now confirmed that the vessel presented invalid registration papers to the Phuket Marine Office in July.”

“But a check by the Phuket Marine Office confirmed that Indonesian officials say they have no record of the boat,” Pol Lt Col Kitipong said.

“Now we are collecting evidence and questioning witnesses,” he said. “Some details can’t be revealed right now, but the Thailand Maritime Enforcement Coordinating Center Area 3 is empowered to reveal more details.”

However, Col Kitipong was unable to provide contact details for the Thailand Maritime Enforcement Coordinating Center Area 3, which his police officers are to report to in conducting their investigation into the missing trawler.

Col Kitipong also declined to discuss the whereabouts of the 182 tonnes of illegal toothfish that was found on board when the boat was seized on March 6.

“You can ask Thailand Maritime Enforcement Coordinating Center Area 3 about that, too” he said.

Now the Navy is lumbered with finding the missing boat.

Vice-Admiral Sayan Prasongsamrej, Commander of the RTN Third Area Command in Phuket, told The Phuket News, “We are still looking for the Kunlun, and we have been working with international organizations since the vessel disappeared.

“We believe the escape was well planned, and I believe that the Kunlun must be hiding somewhere that does not have strict laws against IUUs.”

An officer at the Phuket Marine Office told The Phuket News that Phuket Marine Chief Phuripat Theerakulpisut had been unavailable for comment this week as he been in Bangkok on official business.

“The Thailand Maritime Enforcement Coordinating Center Area 3 (THAI-MECC3) will hold press conference on Monday (Sept 21),” said the officer, who declined to be named.

“They will explain their duty regarding IUUs and how they work together with the Command Center for Combating Illegal Fishing,” he said, before hanging up.