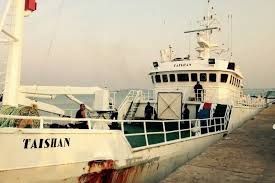 Accusations continue to fly over the escape from Phuket waters of a pirate cargo ship carrying a valuable load of fish, poached from Antarctic waters.

How did the Taishan, formerly the Kunlun, slip away in breach of international law – and who knew that the ageing rustbucket had reloaded plenty of fuel?

How has the ancient vessel continued to elude pursuing warships and aerial reconnaissance?

Latest questions come from the British-based Environmental Justice Foundation (EJF) which is calling on the Thai government to conduct a thorough, transparent investigation to explain how the pirate ship could flee Phuket without Thai authorities noticing.

The secret escape points to continuing corruption that flourishes on Phuket, the closest Thai city to the Andaman coast human trafficking pipeline and an established hideout for international fugitives and professional hit teams.

In the most anguished call so far over the escape of the Taishan with its cargo of illegally captured Patagonian toothfish, the EJF calls for the prosecution of anyone who helped and the implementation of an action plan to prevent similar incidents.

The vessel had been under regular surveillance at anchor off Phuket since March, when the wanted ship was arrested and its cargo removed and trucked south to a cold store in the port of Songkhla.

But the cargo was reloaded in June, as Phuketwan reported at the time, leaving the vessel capable of departing – provided it had a crew and a load of fuel.

The Taishan/Kunlun had been pursued for weeks by the international activist group, Sea Shepherd. And it was an exclusive report from Phuketwan that alerted Sea Shepherd and Thai authorities to the escape of the ship early this month.

Despite a Royal Thai Navy sea and air hunt and notification of neighboring navies, the poachers have eluded capture.

Interpol, plus Australian and New Zealand authorities, had been involved in the pursuit of the Taishan/Kunlun into Thai waters earlier this year.

Results of a police investigation on Phuket into the Taishan scandal have yet to be released.

”The escape of the Taishan should have never been allowed to happen,” said Steve Trent, executive director of the EJF.

”It is inexcusable that a vessel which has been seized and held in port could depart unnoticed.

”It must be quickly and decisively addressed by a thorough and transparent investigation and effective action in the courts.”

Phuketwan was able to determine that the ship was crewed by at least three and possibly four Spanish men.

A Spanish gang is accused of poaching in Antarctic waters and initially aiming to sell the vessel’s 182-tonne cargo in Hong Kong.

The Phuket incident is likely to be raised when Thailand’s Prime Minister, Prayuth Chan-ocha, visits the United Nations in New York next week and when the European Union reacts to Thailand’s consistent breaches of international standards in its fishing industry.

The capture of the Taishan represented a positive step for Thailand. But the positive turned into a negative with the escape of the poacher and its cargo.

”It is important that this incident does not undermine the structural changes and reforms that local authorities and enforcement agencies are conducting. Sustainability and transparency are vital.

“To know the exact conditions that allowed this escape to happen and clarification of the identity of those responsible it is crucial in helping Thailand to clean up its waters and tackle the operators of illegal, unreported and unregulated (IUU) fishing.”