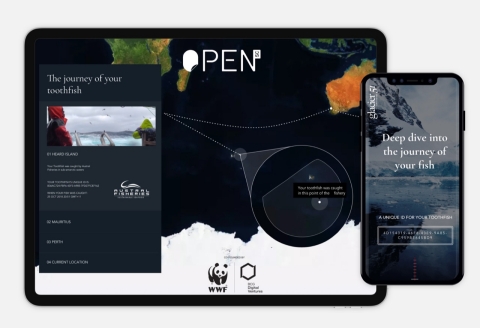 Could using digital tags to track fish reduce seafood fraud, help conservation and hold everyone in the supply chain to account?

In recent weeks, a new $50m (£35m) hybrid vessel set sail from Mauritius and headed out into the Southern Ocean where the crew will spend three months longline fishing for the Patagonian toothfish. By the time the fish are brought back, processed and sent to customers, consumers will know where and when that specific fish was caught, which boat landed it, who processed it and which certifications have been met. The technology enabling this is blockchain.

“From the day it’s landed to when it ends up on someone’s plate, blockchain gives toothfish traceability right from the start,” says Steve Paku, captain of the Cape Arkona. “People can just scan the barcode and the whole story is right there in front of them.”

Blockchain is just one way that fisheries are trying to ensure better traceability from hook to plate but it is garnering a lot of interest. Blockchain cannot be tampered with and the data can be accessed by everyone along the supply chain, from certification schemes to the final consumer. Because it is digital, decentralised and updated in real time, a blockchain tag contains valuable information that a physical label never could. In combination with DNA testing to prove the specific species of fish, blockchain could play a role in reducing fraud in the seafood industry.

This also matters from a conservation perspective. More than a third of fish populations are overfished, according to the UN’s Food and Agriculture Organization (FAO). Guaranteeing where and how a fish has been caught can help ensure that the catch has been made in an area with sustainable fish populations. It can also help tackle the problem of bycatch. In degrading marine ecosystems, bycatch is detrimental to biodiversity and puts additional, unnecessary strain on marine wildlife. Young fish get caught up in nets with too small a mesh, turtles and dolphins can get entangled in gillnets, and seabirds, including endangered albatross, get injured by hooks unless deterrents are put in place.

Paku has fished for 35 years, first for crayfish off the New Zealand coast and, since 1997, for toothfish, sometimes amid 15-metre swells and 50-knot winds (90km/h). Two years ago, the company he works for, Austral Fisheries, introduced blockchain technology, which Paku says has just become part of the process. “When we catch the fish, we take the head, tail and fins off, then a digital tag gets attached to the trunk of each fish before it gets frozen onboard. Blockchain backs up the traceability of the fish more substantially – I think this will become the norm in the future.”

Since the Netflix ‘documentary’ Seaspiracy, there has been growing concern from some about whether seafood can ever be certified as truly sustainable. But blockchain advocates argue that it has already been used to highlight fishy findings in a few high-value seafood supply chains. In 2016, UK-based traceability platform Provenance piloted blockchain in yellowfin tuna loins and skipjack tuna supply chains, tracing products back to individual fishers in Indonesia. WWF-New Zealand used blockchain in a tuna longline fishery in Fiji in 2018, while the Sustainable Shrimp Partnership in Ecuador links data from farmed shrimp to a blockchain platform run by the IBM Food Trust.

According to David Carter, chief executive of Perth’s Austral Fisheries, blockchain is an added layer of accountability that enables continuous monitoring rather than spot-check audits. “We want to achieve transparency as cheaply and cost-effectively as possible. MSC certification could be much simpler in the future,” says Carter. “We could just get to a point where we publish our scoring criteria.”

Carter works with OpenSC, a software company based in Sydney, to verify, trace and share data that provides assurance to consumers, and regulators, about where each toothfish has been caught. “Where a ship is fishing is arguably the most important claim to verify for line-caught seafood. A rogue captain can’t change the fishing locations that have been recorded using blockchain. Nobody can,” says Markus Mutz, chief executive of OpenSC, which is co-founded by WWF and startup BCG Digital Ventures.

“We’re not trying to replace a certification scheme,” he adds. “We believe we can be a great additive to it.” OpenSC’s mission isn’t to pass judgment about whether a product is sustainable or not – they provide the database proof of something happening and then it is up to others to judge. “Certification can be quite binary but in reality sustainability isn’t clearcut. Everything is on a scale.”

“Blockchain has proved to be an exciting way to track digital data in some pilot case studies, such as with the important work of Austral Fisheries and OpenSC on toothfish,” says Natalie Hunter, MSC head of supply chain development. “However, certification standards like the MSC are not just about data, but about practices and processes that ensure sustainable harvesting and effective labelling to remove fraud. Technology will support and improve certification, but it will never be able to replace robust, independently audited certification schemes like the MSC.”

FAO traceability expert, Petter Olsen, believes that while the complexities of the seafood supply chain make it suitable for blockchain, it is not scalable or commercially viable across the sector. “Blockchain works for high-value products where the consumer can pay a bit more for that assurance, and I think we’ll see QR codes or barcodes on more special-interest products,” Olsen says. But he believes the potential of blockchain has been exaggerated. “It’s immutable, so any changes will always be tracked but it’s just a database.”

A recent Guardian investigation found that seafood fraud is prevalent on a “vast global scale”, with 36% of seafood sampled in supermarkets, fishmongers and restaurants mislabelled. But Olsen argues that sometimes, rather than direct fraud, it can be a naming problem. “Common fish names such as sardine or anchovy mean different things in different countries,” says Olsen. “Seafood has the longest supply chain of any food product, with on average seven stages from catch or farming to the consumer, so it’s convoluted but also geographically complex with people speaking different languages.”

“Consistent data is the gold,” says Libby Woodhatch, executive chair of the Marin Trust, the international program for marine ingredient certification. “There are lots of different blockchain systems being used in the fishing and seafood processing industry but they all need to be interoperable to ensure the same level of information can be provided from start to finish.”

WWF has set out to tackle that, launching the Global Dialogue on Seafood Traceability in 2017 “dedicated to drafting the first-ever global standards for seafood traceability”.

While it will not single-handedly eliminate llegal, unreported and unregulated fishing (IUU) or prevent overfishing, blockchain will “deeply modify” how fish are traced, according to an FAO report. The authors suggest that the technology could be best used by fisheries that voluntarily want to show their legal compliance to meet consumer demand and improve trade, and that this may develop even in places where legislation is lacking.

Carter, as an early adopter, is hopeful. “Fishing is a long-term game. The real value is directly measured by the wellbeing of the resource that we rely upon and how clever we are at harvesting and selling it. Anything we do that damages that is just dumb.”

Modified from Anna Turn’s article at The Guardian.