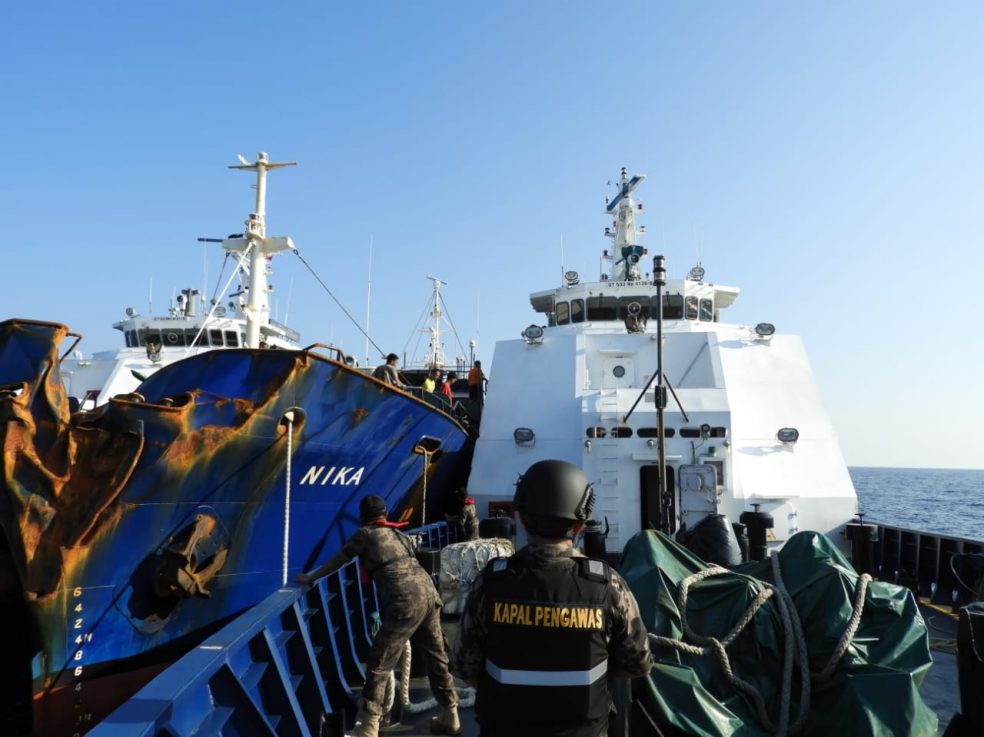 A notorious vessel wanted in several jurisdictions was recently seized by Indonesia. Here’s the story of how international cooperation between INTERPOL, Indonesia, the Government of South Georgia and the South Sandwich Islands (GSGSSI) – UK, Korea and Panama, together with Global Fishing Watch’s vessel tracking expertise, helped make it happen.

On the morning of Friday 12th July, two Indonesian fishery patrol boats closed in on a rusting 750-tonne vessel in the middle of the Strait of Malacca – one of the busiest and most important shipping lanes in the world.

The vessel they were targeting, the Panama-flagged MV NIKA, was registered as a cargo vessel – 750 tonnes is a substantial size. Yet the MV NIKA had been sought by INTERPOL since June this year, following a request for assistance from a member country, for suspected illegal fishing operations. It was nearing the end of a 13,000 kilometre journey from the Southwestern Atlantic where it had originally been identified for flouting fishing regulations.

One month earlier, the hapless MV NIKA had come off the worse in an encounter with an iceberg in the frigid waters off South Georgia. Still able to sail, the MV NIKA began the long limp back for repairs in China. That iceberg was a decisive factor in the vessel’s fate.

The MV NIKA has a long track record as an outlaw vessel. Since 2006, it had changed its name 7 times, and switched flags 7 times. The practice of flag-hopping is a well-known ruse for vessels wishing to cover their tracks. The vessel’s beneficial owner is believed to also be the owner of the notorious STS-50 vessel which was captured, after a similar pursuit, earlier this year for illegal fishing of Patagonian toothfish. The MV NIKA also has connections with South Korean fishing operator Poseidon Co Ltd (Titan).

The ship had previously been impounded by Russia for illegal crab fishing – but it was released and set off once again, initially under a Cambodian flag before switching to a Panamanian flag, and registered as a cargo vessel, that could not sail, for safety reasons, more than 200 nautical miles from any coastline. Crab is a highly lucrative fishery for the Russian Federation in the sub-Arctic region, but recently authorities there have been cracking down on rampant illegal, unreported and unregulated (IUU) fishing activities. This may explain why the MV NIKA ended up, with its crab pots, in another fishery in the Southwestern Atlantic.

The MV NIKA was detected near Argentina’s EEZ in April 2019. According to Indonesian crew members’ information, it fished but hauled no catch. The vessel was then tracked in the highly protected waters of South Georgia and the Falklands in late May and early June. Its activities raised suspicions – the waters are overseen by arguably the world’s best run multi-national fisheries management body, the Commission for the Conservation of Antarctic Marine Living Resources (CCAMLR). The vessel was intercepted and inspected. It was found with deep water species, soft corals and other marine products onboard, but no bulk catch. The vessel was then expelled from South Georgian waters, and it was at this point that it struck the iceberg. Luckily for the crew, it was not a fatal encounter. But it still sealed the MV NIKA’s fate.

Following the inspection near South Georgia, the United Kingdom, a member of CCAMLR, brought the MV NIKA to INTERPOL’s attention via the not-for-profit organization OceanMind, and the net began closing in. This is where the crucial role and support of Panama comes in. Panama is shortly expected to publish its fishing vessel data on the GFW public platform, this includes its extensive carrier vessel fleet used in transshipment of catch. This is a major step in helping meet its flag state responsibilities. Panama, following the request for validation of the vessel’s information, namely the registry and licensing conditions, also readily agreed to cooperate in the MV NIKA case, asking INTERPOL to support getting the vessel located, tracked and investigated in port or coastal waters.

Panama was aware that the MV NIKA’s route of navigation might pass through Indonesia’s EEZ and subsequently asked authorities that the vessel be intercepted by a patrol boat, boarded and brought to port under the Port State Measures Agreement (PSMA).

By the time the MV NIKA was nearing Indonesia’s EEZ, its movements had been tracked since February this year, with the help of Global Fishing Watch analyst, Imam Prakoso, as it had illegally turned off its vessel tracking system required on all vessels of its size. Imam’s analysis – showing where the MV NIKA had been and its activities – provided the Indonesian IUU Fishing Task Force with important data needed to reach the decision to intercept the MV NIKA.

As the vessel moved up towards Indonesian waters and into the Strait, a live multi-way communication between Indonesian naval and fishery officials, INTERPOL and GFW analyst Charles Kilgour, swapped information on its every move. GFW analysts helped predict the MV NIKA’s course and identify rendezvous points where the patrol vessels could intercept. GFW does not normally get involved directly in live enforcement actions, but it has worked closely with Indonesia since the country became the first nation to make its fishing fleet data public on the GFW platform in 2017. That close relationship was a key factor in the success of this case.

Finally, at 08.06am (local time), the MV NIKA was in the net – intercepted by Indonesia’s patrol boats, ORCA 2 and ORCA 3, and taken under custody to harbour. The vessel had 18 Russian and 10 Indonesian crew members aboard. The crew were detained and are now being questioned regarding the vessel’s activities. Despite being registered as a general cargo vessel, the MV NIKA was found with fish processing facilities on board, as well as crab pots and other fishing gear ready to be used on deck, as well as herring for bait.

Indonesia has become a crusader against illegal fishing under its flamboyant Minister of Maritime Affairs and Fisheries, Susi Pudjiastuti, claiming it costs the economy billions of dollars annually. Jakarta has blown up or sunk hundreds of foreign vessels caught fishing without a permit after impounding the boats and removing the crews. In total it has seized more than 500 vessels since a ban on foreign vessels in Indonesian waters was enacted in November 2014. The capture of the MV NIKA marks another important victory for Indonesia’s clamp down on illegal fishing.

The story of the MV NIKA is a cautionary tale about the complexity, opacity and unaccountability still present in the global commercial fishing industry. But its capture tells a different story. More and more countries, even those with traditionally fewer resources than developed nations, are willing to cooperate, share data and make use of increasingly sophisticated technologies to end the illegal plunder of the ocean. A major part of eliminating IUU fishing lies in transparency and international cooperation in a timely manner. If countries publicly share their vessel monitoring data, we can create a more complete and connected picture of global fishing activity. Law-abiding fishers are tracked easily and openly, demonstrating their compliance. Rogue operators stand out due to their patchy track record or suspicious behaviour. Compliant fishers can be rewarded through faster, more efficient port entry and landings. Unauthorised vessels, and those with a history of non-compliance, can be prioritised for inspection or even denied port entry.