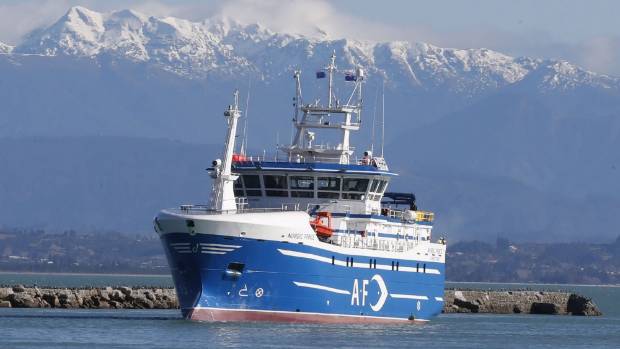 Port Nelson’s ship fixers have secured a big boost to its winter work schedule with the arrival of the first of three international toothfish longliners.

Repair work is to be carried out by Aimex Service Group and several Nelson-based contractors.

The chief engineers on board the Nordic Prince are from Nelson, and they will work in conjunction with the vessel’s Turkish shipbuilders as part of its first-year warranty repairs.

“Because it’s a new build, it’s like a new house – sometimes you have to get the electrician back because maybe some pumps aren’t working as well as they should,” said Winsome Dormer of the ship’s agent, Independent Provedoring.

Another Argos Froyanes boat, the Argos Georgia, is expected to arrive on July 25 for similar work. A third vessel, Argos Froyanes, is due at the end of August.

All three vessels will be based in Nelson until mid-November, when they will head to Lyttleton to reprovision before heading back to fish in Antarctica’s Ross Sea.

Both measuring 54m in length and with a carrying capacity of 407 tonnes, Nordic Prince and Argos Georgia were built in Yalova, Turkey this year and sail under the British flag.

Designed in collaboration with Marin Teknikk of Norway, the vessels feature ice strengthening and an innovative hull design combined with a next-generation drivetrain that delivers a 30 per cent reduction in CO2 emissions.

Fish will be brought on board through a specially designed moon pool in the centre of the hull, designed to provide safer working conditions for the crew.

The vessels operate under quota for toothfish in the Southern Ocean and the southern Atlantic Ocean.

Since the boat’s christening at Gibraltar in March this year, the 10-strong delivery crew has travelled to the Uruguayan capital of Montevideo, the Falkland Islands and South Georgia en route to Nelson.

Skipper Leif Petter Hoddevik’s first fishing trip coincided with his 16th birthday. Almost 40 years on, he said he was proud to have graduated from cook to being in charge of a high-quality vessel like the Nordic Prince in the lucrative toothfish industry.

“Some skippers will hope to be in charge of one new boat in their career, some are lucky to have two – this is my fifth.”