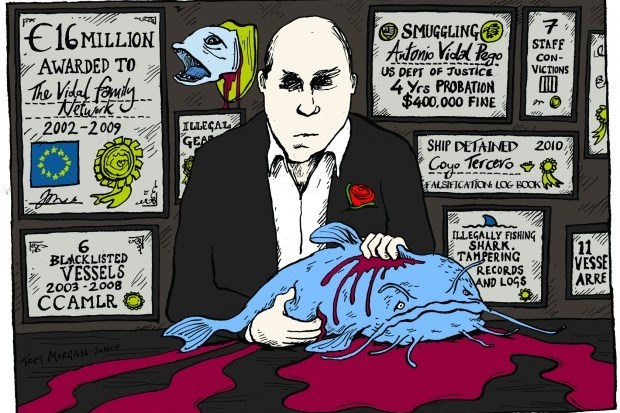 The Yuyus operation is the name chosen by the Civil Guard to christen a major police operation from Madrid, whose main objective was the Ribeiran company, Vidal Shipowners, for their alleged involvement in illegal fishing for toothfish in the Antarctic. The research, led by the Nature Protection Service (SEPRONA) through its central arm, the Central Unit Operational Environmental (UCOMA), jumped yesterday to light with the participation of many agents in four arrests made both at the Vidal family house and the headquarters of his company, both in Ribeira.  A company belonging to the same group and is based in Boiro; and in a third location in A Coruña. All these units, except for the residence of the owner of the company, had been registered as part of Operation Sparrow, launched from the Ministry of Agriculture a year ago.

The operation resulted in four detainees from the Vidal family accused of a crime of illegal fishing of toothfish in Antarctic waters, contained in the agreement of the Commission for the Conservation of Marine Living Resources of Antarctica.

Those arrested include the owner of the company, Antonio Vidal Suarez, Tucho the Coyo, and his eldest son, Tono. Both arrests were carried out during the searches conducted in Ribeira, which generated great expectation for the presence of vehicles of the Civil Guard, agents guarding the main entrance of the office for much of the day and the included multiple INTERPOL agents.

Although the identities of the other two clan members arrested were not disclosed, there are sources that say it is two children of Antonio Vidal, Angel and Bethlehem, who usually work in the factory in the industrial area of ​​Boiro, which for several years, manufactured products and accessories containing Omega-3.

Already late and after finishing the records (which began about 0930 hours and concluded shortly before 18.00), the accused were transferred to the city of A Coruna to enter the dungeons, but throughout the day could be transferred to Madrid for further investigation. And the yuyus operation instructed in the High Court and the proceedings are the responsibility of UCOMA. In addition, during the searches yesterday, national agents from Madrid were assisted by members of Interpol and Europol. Moreover, agents and UCOMA last week and visited incognito the region of Barbanza coruñesa to make a first reconnaissance of the area and the properties of Vidal Shipowners they planned to arrest.

The fact that the National Court enacted justice and that records yesterday from Interpol agents and Europol, shows that transcends the Spanish border. Judicial sources consulted were opaque in providing any information and merely recall that the proceedings are secret. Moreover, they would not confirm or deny whether there is a fifth detained under the yuyus operation, as some sources claimed at the time.

Another point which remains in the air is whether the searches and arrests made in yesterday are just the tip of the iceberg, since presumably the crimes under investigation could have ramifications in other parts of Spain and even abroad , which would explain the presence of agents of Interpol and Europol.

For the accused detainees, it is not excluded that allegedly may also include others offenses such as forgery or money laundering. No one could confirm yesterday if there will be new records or more arrests, either in Galicia and in other areas of the country.