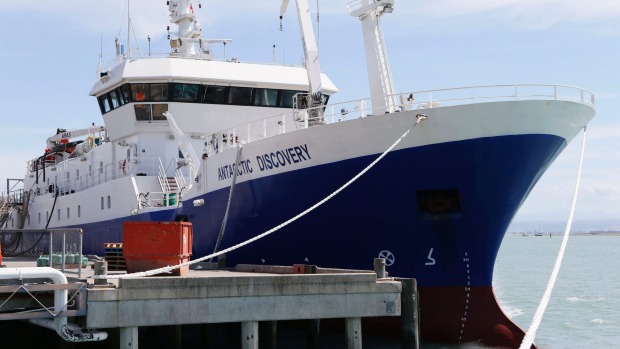 A new addition to the Sealord fleet for the annual Ross Sea toothfishing expedition is Australian-flagged and registered but has a dozen New Zealanders in its crew.

The 57-metre Norwegian-built Antarctic Discovery has been refitted at Port Nelson this month and was expected to leave on Friday.

It has joined the Antarctic Chieftain under the ownership of Australian Longline, which is owned 50-50 by Sealord Group and Nissui of Japan.  Sealord in turn is 50 per cent owned by Nissui, the remainder belonging to New Zealand’s collective iwi, who got it as part of the Maori Fisheries Settlement.

The Antarctic Chieftain has twice been hit by propeller damage in the icy Ross Sea toothfish grounds near Antarctica, and was trapped for five days in February last year until freed by the US Coastguard icebreaker Polar Star.

Sealord fishing general manager Doug Paulin said the Antarctic Discovery was “a better ice-class boat” than the Antarctic Chieftain.  Both boats would target toothfish but the Chieftain would be used on other less ice-prone fishing grounds, he said.

Australian Longline chief executive and former Nelson-based skipper Malcolm McNeill, now based in Hobart, said the Antarctic Discovery was built in 1995 as a toothfish vessel and until recently was one of the biggest boats of its kind in the world.

It had fished out of Argentina for some years, with his company acquiring it from a Norwegian toothfish company a short time ago.

It was undergoing sea trials today before setting sail for toothfish grounds south of Australia in East Antarctica.

It would likely not be seen in Nelson again until late November when it arrived to gear up for the annual Ross Sea olympic fishery, when vessels from approved nations fish until the overall agreed quota has been caught.

However Nelson had “a very good engineering infrastructure” and if the first trip showed that significant work needed to be done on the new ship, it would come back to Nelson in late March.

McNeill said the Antarctic Discovery’s hull design meant that it was less prone to the propeller damage suffered by the Antarctic Chieftain in the past two seasons.

“Often the limits are pushed harder than you would normally do if you’re just down there with your own quota.”

Meanwhile the Antarctic Chieftain had “a full campaign” in the southern Indian Ocean.

This sort of fishing was newer to Australia and many of the senior positions on the boats were filled by Kiwis, McNeill said.  The Antarctic Discovery would carry 24 crew plus two observers.

Sealord and the other big Nelson-based seafood company, Talley’s, were toothfishing partners for some years, operating the Antarctic Chieftain and the Janas from Nelson under a New Zealand Longline banner. In mid-2014 they separated, with Talley’s keeping the Janas.

The Ross Sea toothfish catch was pioneered by New Zealand boats in the late 1990s and the fish are now targeted by a multi-national fleet of between 15 and 20 vessels each summer.

They are limited to 3000 tonnes between them, closely monitored by the Commission for the Conservation of Antarctic Marine Living Resources (CCAMLR).