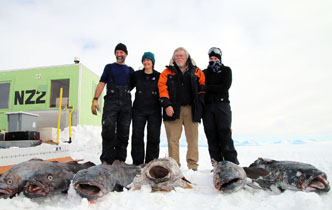 A new scientific paper has been released following a study that began in 2013 to monitor toothfish abundance and investigate interactions between Antarctic toothfish, Weddell seals and killer whales in McMurdo Sound.

Abstract:
A dramatic reduction in catch rates of Antarctic toothfish in McMurdo Sound, Antarctica, has led to conclusions that the commercial bottom longline fishery for toothfish in the Ross Sea has drastically altered the toothfish population with cascading effects on the McMurdo Sound ecosystem. However, results from a new monitoring programme for Antarctic toothfish and other top predators carried out in McMurdo Sound in 2014 have shown toothfish catch rate, fish size and fish age similar to those observed prior to 2002. These results suggest that either large and old fish have returned to McMurdo Sound following a temporary environmentally driven absence or that they remained locally present but were not detected in the areas sampled. These findings highlight the importance of continued standardized monitoring for detecting the potential effects of fishing on the Ross Sea ecosystem.

Full article can be found here.