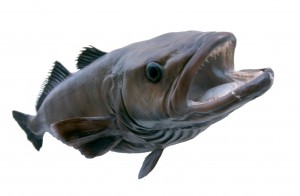 The Patagonian toothfish, (Dissostichus eleginoides), and Antarctic toothfish (Dissostichus mawsoni) are deep sea species found throughout large areas of the sub-Antarctic and Antarctic oceans.  In some markets it is also known as Chilean Seabass, Mero, Merluza Negra, Bacalao de Profundidad and Legine Australe.

Toothfish are bottom dwelling, in depths of 300 metres to 3,500 metres, but move off the bottom on occasion to feed.  Consequently, most fishing grounds are concentrated on continental shelves around islands in the region.

These species can be fished to depths of 3,500 metres. However this varies with smaller fish typically found in shallow waters, and larger fish in deeper waters, with spawners generally between 1,400 and 2,000 metres.

The Patagonian toothfish reaches spawning age between 8 and 10 years, at which stage it is about 80cm long. The fish can reach an age of around 60 years, a maximum length of 2.2 metres and about 120 kg in weight. Its diet is mainly based on squid, fish, crabs and prawns. The Antarctic toothfish has very similar biological characteristics, but is thought to grow a bit slower than Patagonian toothfish, and has a smaller maximum length (estimated at around 1.8 metres). These differences in growth, and sexual maturity, as well as the lifespan of the fish, very by region, and are all taken into account by scientists in the regular reassessment of population status, and the setting of allowable catches.

Commercial Patagonian toothfish fisheries began in the late 1980s off the coasts of Chile and Argentina, including the Falkland Islands. Over time, fisheries began moving eastwards with South Georgia, Bouvet Island, Prince Edwards and Marion Islands, Crozet Island, Kerguelen Island, Heard Island and McDonald Islands, as well as Macquarie Island. There are also artisanal fisheries for Patagonian toothfish off the continental slopes of Chile, Argentina, Peru and Uruguay.

Commercial fishing of toothfish is managed by the Commission for the Conservation of Antarctic Marine Living Resources (CCAMLR) inside the CCAMLR Convention Area which spans the Antarctic Continent between 45° and 60° South.  Some fisheries inside territorial waters within the Convention Area (e.g. Crozet Island, Prince Edwards and Marion Islands) are managed separately by countries with territorial waters taking CCAMLR management practices into account. Toothfish fisheries outside the CCAMLR Convention Area in the coastal waters of Argentina, Chile and Uruguay are managed by the relevant coastal state.  However, these fisheries are still subject to the CCAMLR Catch Documentation Scheme (CDS) which tracks the trade of toothfish from the point of unloading to the point of final consumption.

In the toothfish fisheries managed by CCAMLR and countries with territorial waters, the main method of fishing permitted is longlining.  Some fisheries also permit trawling and trapping. For all methods of legal fishing for toothfish, there are minimal interactions with seabirds. This is a result of requirements for legal operators to use mitigation devices or approaches such as:

Fishing by trawling does not usually harm seabirds but does tend to catch toothfish in the smaller size range, which is taken into account during stock assessment, and will result in a lower allowable catch because of this.

Bycatch species (fish caught incidentally to the ‘target’ species) when fishing for toothfish are also closely monitored by CCAMLR and national fisheries bodies.  There are catch limits imposed on bycatch species to ensure that the levels of catch do not exceed biological or ecologically sustainable levels.  Bycatch in toothfish fisheries are typically in the vicinity of less than 10% of the target species.  On all toothfish vessels in CCAMLR waters there are at least one, and often two, government-approved observers monitoring all aspects of the fishing operation.

From the mid 1990s to the mid 2000s, illegal, unregulated and unreported (IUU) fishing for toothfish was a very serious problem.  In recent years, however, IUU fishing has been virtually eliminated due to a combination of increased surveillance, high-profile apprehensions and prosecutions and strict port and market regulations. Estimates of historic IUU catches are taken into account during the stock assessment process.

IUU fishing for toothfish was originally undertaken by longline vessels, with serious consequences for seabirds. However, from the mid 2000s, the remaining IUU fleet switched to gillnet operations. Whilst this method is indiscriminative below the water, it poses less risk to seabird bycatch. Equally, the reduction in numbers of IUU boats from a peak of over 55 longliners (none applying any mitigation measures to avoid catching seabirds) in the late 1990s, to around 6 between 2012-2015 that used gillnets.  These last remaining IUU vessels were labelled the ‘Bandit 6’ by Sea Shepherd, and all have since been detained or sunk.

A number of toothfish fisheries have received certification by the Marine Stewardship Council as sustainable and well-managed fisheries. These fisheries have the ability to use Chain of Custody certification, in addition to the CCAMLR Catch Documentation Scheme to prove the provenance of their catch.  In addition to the MSC, most toothfish is now recommended by the Monterey Bay Aquarium Seafood Watch program.

For more information visit CCAMLR or go to our Links page for other interesting sites. 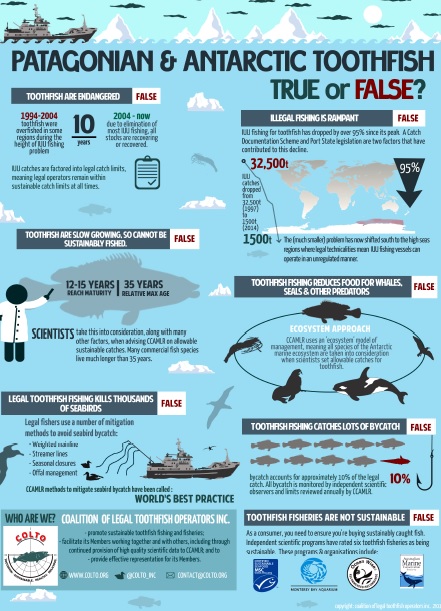