Argos Froyanes, in conjunction with partner Ervik Havfiske, is constructing a new, specially-designed vessel for toothfish longlining in the hazardous waters of the South Georgia and Ross Sea.

The company, itself a partnership between Norway’s Ervik Havfiske and UK overseas territories-registered firm Argos, hopes the new vessel can win it additional fishing rights in the strictly managed fishery.

“This is an investment north of $20 million, so absolutely we hope the authorities continue to support us in the fishery,” Peter Thomson of Argos Froyanes, told Undercurrent News.

South Georgia’s toothfish fishery falls within an area managed by the Commission for the Conservation of Antarctic Marine Living Resources (CCAMLR) and the South Georgia government, and is “one of the most highly regulated fisheries in the world”, he said. It is also a designated as a marine protected area, and was the first toothfish fishery to be Marine Stewardship Council certified.

Licenses to fish there only last for two years at a time, and management authorities strive to increase their standards each time they assess applicants for quotas.

As can be seen from the graphs below, CCAMLR quotas are stable and on a gently rising trend, allowing Argos Froyanes the confidence to invest in new vessels, he said.

“This vessel we’re building is as much a research platform as it is a commercial fishing enterprise,” said Thomson.

“While at sea we’re essentially operating in a science partnership with the government,” he said. 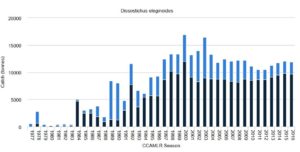 “The vessel it’s replacing is already a good, modern longliner, but the step up to the new one in terms of safety, efficiency and crew comfort is big.”

Thomson, and Olav Steimler of Ervik Havfiske, believe the new vessel – named the Argos Georgia – will be “the standard model in ten or 15 years, for cod and haddock longlining too”, due to its high levels of modernity and safety. It will join the company’s second vessel, the Argos Froyanes.

It boasts a “moon pool” through which toothfish can be lifted straight into the processing area through the hull of the vessel, before being blast frozen and stored in freezer holds. This should be safer for crewmembers as they need not be exposed to the elements outside, and should cut losses of fish at the point of leaving the water. 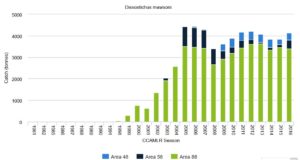 It is 54 meters long and can carry 28 crew, including accommodation and specifically-designed workspaces for two observers.

“Authorities require us to carry one independent observer, but we want our own to be present as well, for research purposes,” said Thomson. “All the ‘compliance’ tasks, such as fish counting and checking the deployment of bird mitigation devices, can be done by CCTV, leaving the observers more time to undertake scientific research.”

The vessel is due to launch in February 2018, ready for the fishery to open in April of that year. It is currently under construction at Turkey’s Tersan Shipyard. 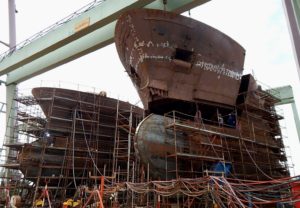 Work under way at Tersan Shipyard

Globally, the 2016 total toothfish allowable catch was 26,818t, with 23,010t being caught by the Coalition of Legal Toothfish Operators members and 20% of global landings coming from South Georgia and the Ross Sea.

Around $4.50/kg of the headed and gutted sales price goes to he government in license fees, Thomson estimated.

At the beginning of 2017 toothfish prices ceased the rapid rise seen over recent years at the levels they reached at the end of 2016, and looked set for a more manageable and stable 2017, two fishing firms told Undercurrent.