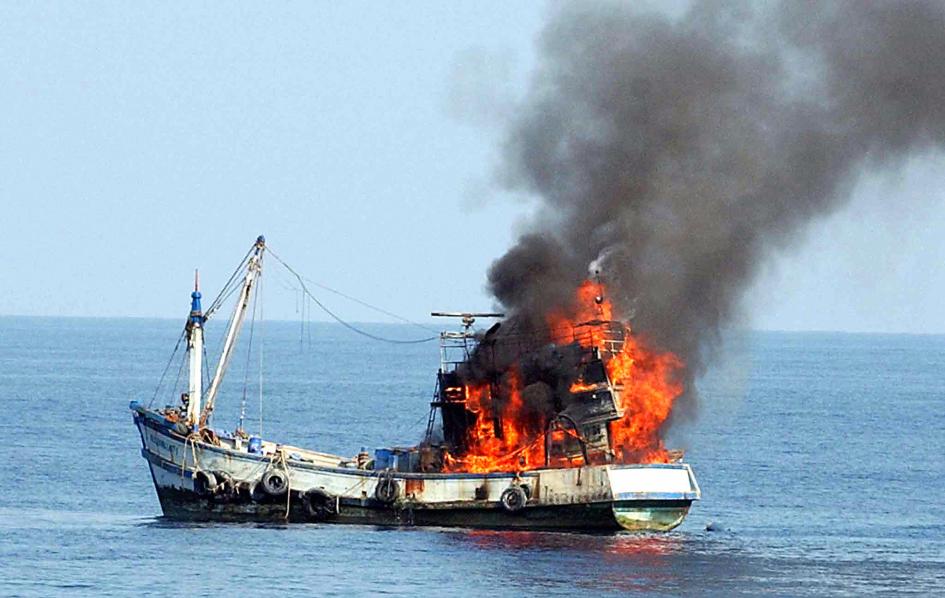 Last spring, the Thunder, an alleged poaching vessel, met its end off the coast of São Tomé and sunk to its watery grave. The Thunder was allegedly part of an armada of fishing scallywags that cumulatively siphon billions of dollars a year from the global fishing economy and wreak untold damage on fisheries around the world. Now, recently released research suggests that, despite their nefarious intentions, many of these illegal vessels are still covered by marine insurance.

Researchers from the University of British Columbia found that many illegal, unreported, and unregulated (IUU) vessels—aka pirate fishermen—are insured for third-party liability coverage even though they are named on many ocean watchdog lists. The findings, published this week in the journal Frontiers in Ecology and the Environment, expose an often overlooked aspect of the fishing industry.

Protection and indemnity insurance is required by international law for all vessels over 1,000 gross tons in size. This insurance covers third-party liability for damage to the environment or another vessel through collision. Intended to protect lawful vessels, this insurance can also inadvertently embolden rogue ships by providing economic security in the event of an accident.

The researchers found no obvious differences in insurance coverage provided to IUU vessels and lawful fishers. Nearly half of the 94 IUU vessels (48 percent) were insured, compared to 58 percent of the lawful vessels. The findings indicate that IUU vessels seek coverage from commercial insurers more often than mutually owned insurance clubs, but found that 14 different insurance companies cover the illegal ships.

While these results were revealing, the numbers of illegal ships with insurance was less surprising to Miller than the notoriety of some of the insured vessels.

“The thing that shocks me the most is the well-known, notorious fishing vessels that were insured,“ she explained. “This tells me that this was a very fresh approach and that the insurance companies were not aware of this…that it was not on their radar.”

The ranks of insured IUU vessels included nine boats listed on the Regional Fisheries Management Organizations and European Union IUU vessel lists. Most notably, the list counts members of the so-called “Bandit Six,” a group of allegedly villainous ships—including the Thunder—thought to poach Patagonian toothfish (Dissostichus eleginoides) in the Southern Ocean. The research team also found five insured vessels with outstanding “Purple Notices” issued by INTERPOL; these notices are requests for international cooperation in obtaining information that could lead to arrest.

Beyond the High Seas?

The research also included a conceptual economic model that demonstrates how insurance policies benefit IUU ships. In general, they found that the expected damage from an accident is larger than the expected out-of-pocket expense for insurance premiums. Removing insurance access could therefore provide the economic bite that makes illegal trawling of the ocean less favorable of an economic gambit.

Reached for comment through email, Pramod Ganapathiraju, an independent fisheries consultant and expert in illegal fishing, lauded the findings.

“I think it is…a very important study on one of the least known aspects of the fishing industry,” he says.

He notes, however, that the study gives “a picture of insurance coverage for the high seas rather than coastal exclusive economic zones up to 200 nautical miles from coast, where the bulk of illegal fishing is concentrated.”

Non-profit organizations have discussed the issue of marine insurance for years, but this is the first academic study to research the problem. Miller feels that the findings could be an important revelation for sustainable fishing advocates: “I am very optimistic that there is an opportunity here for reformed practice in the insurance industry to decrease access for illegal fishing vessels.”

She continued, “If we can add another tool to the toolbox, and if it can have even a slight impact to reduce illegal fishing, it is a move in the right direction.”

The release of the UBC study coincides with the ratification of the first global treaty designed to “prevent, deter, and eliminate” illegal fishing. The UBC findings, in combination with the international treaty and progress on President Obama’s Presidential Task Force on Combating IUU Fishing and Seafood Fraud, are a boost for ocean activists in their fight against destructive fishing practices.