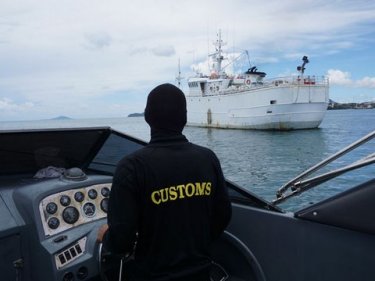 Three Customs officials have been transferred off Phuket after a cargo ship carrying an illegal haul of fish valued at millions of dollars secretly upped anchor and escaped from the island, bringing international criticism.

Phuketwan understands that the Phuket Customs director, now working in Bangkok, signed the authorisation that enabled the Taishan to refuel. Soon after, the ship took to international waters and vanished.

While there is nothing illegal in the director’s actions, approving the refueling enabled the ship to escape.

International environmentalists have also questioned why the vessel was allowed to reload its valuable but illicit cargo of 182 tonnes of fish, poached illegally from southern waters.

The fiasco of the fugitive cargo ship escaping with its cargo and just a skeleton crew threw an unwanted international spotlight on Thailand’s preparedness to become a contributor to measures to stop poaching.

A British-based group, the Environmental Justice Foundation (EJF), was among organisations that called on the Thai government to conduct a thorough, transparent investigation to explain how the pirate ship could flee Phuket without Thai authorities noticing.

In the most anguished call over the escape of the Taishan with its cargo of illegally captured Patagonian toothfish, the EJF called for the prosecution of anyone who helped and the implementation of an action plan to prevent similar incidents.

The vessel had been under regular surveillance at anchor off Phuket since March, when the wanted ship was arrested and its cargo removed and trucked south to a cold store in the port of Songkhla.

But the cargo was reloaded in June, as Phuketwan reported at the time, leaving the vessel capable of departing – provided it had a crew and a load of fuel.

Four Spanish men are believed to have been on board the vessel when it sailed. Indonesia’s embassy in Bangkok warned the sailors who had originally made up a larger crew not to sign on again.

The Taishan – previously known as the Kunlun – had been pursued for weeks by the international activist group, Sea Shepherd.

And it was an exclusive report from Phuketwan that alerted Sea Shepherd and Thai authorities to the escape of the ship early this month.

Interpol, plus Australian and New Zealand authorities, had been involved in the pursuit of the Taishan/Kunlun into Thai waters earlier this year.

Thailand’s Command Centre for Combatting Illegal Fishing led the investigation that resulted in the transfer of the Customs officials.

The Taishan – an ancient rust-bucket that frequently undergoes name-changes – has escaped detection since fleeing Phuket despite a Royal Thai Navy sea and air hunt and notification of neighboring navies.