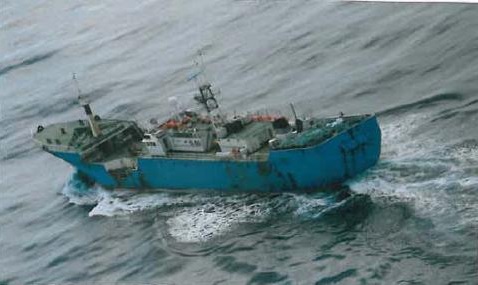 “The vessel has a long history of IUU fishing in the Southern Ocean and is the subject of an INTERPOL Purple Notice seeking information on the individuals and networks that own, operate and profit from the actions of the vessel,” Senator Colbeck said.

“The captain of the vessel attempted to avoid detection by claiming the vessel was flagged to Nigeria. Australia is working with Malaysia to disprove this claim and identify other irregularities in documents carried by the vessel.”

Senator Colbeck said Australia continues to work closely with international partners, including INTERPOL and through the Regional Plan of Action with south-east Asian countries, to combat IUU fishing.

“Just last month we congratulated Thai officials for the detention of the IUU vessel Kunlun, after Australia alerted south-east Asian nations to the potential arrival of the vessel into their ports,” he said.

“The detention of the Viking is another example of international cooperation reaping benefits on stamping out IUU fishing.”

Australian and Malaysia have a strong record of working together and earlier this month officers from the Australian Customs and Border Protection Service and Australian Fisheries Management Authority were in Malaysia to share information to help combat IUU fishing.

“By taking a strong stance and by working together to manage issues around IUU fishing we can make a big difference,” Senator Colbeck said.

Senator Colbeck said Australia will continue to work in collaboration with regional partners to deny IUU operators access to markets to sell their illegally caught fish.